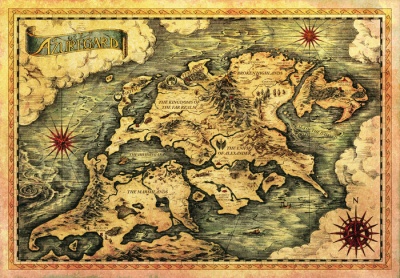 Azuregard is an ancient world populated by the races of men, dwarves, elves, and orcs, rich in history, but one that also faces a growing strife which threatens the balance of peace.

Demi-humans also make their home on Azuregard. The dwarven race dwells hidden in the mountains where they’re most attuned to the rock and stone from which they sprang in the Elder Age. Their society is centered upon a legendary city nestled at the heart of a dormant volcano and serves as a trading hub while it links outlying dwarven settlements. In contrast, the elves continue their relative isolation in the safety of the forests and woodlands of Vervanna.

Of the humanoid races, mankind stands as the most numerous and hardy, having carved out territory in the Kingdoms of the Far Realms, which includes the Kingdom of Stern, as well as the Alexandrian Empire which is broken up into smaller states and territories.

Finally, the orcs are a nomadic tribe which roams the mountains and the Broken Highlands after being pushed out by the Alexandrian Empire so long ago. Despite this, some hunger for the glory of the old days where their race was ascendant. Because of this, the orcs have begun to slowly encroach upon human territory, as old grudges have sparked bouts of warfare.[1]