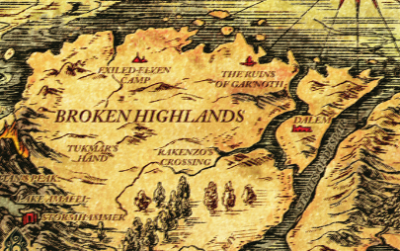 Excerpts From the Travelogue of Reinhard Humboldt: The Unforgiving Broken Highlands[edit | edit source]

"It was our 5th day out of Stormhammer that we caught sight of him. He was tall, but gaunt, with a heavily tattooed face and hair so wild and unkempt that it was a mixture of knots, sticks, leaves, moss, and mud. I think I even saw a few flies buzzing around him, but he spared them no thought as his gaze was transfixed upon our band. Our attempts to hail him was met with a stony silence and when we tried to draw near, he scampered away, jumping from boulder to boulder with the agility of a mountain goat, snarling and hissing at us with each leap. That was probably the only time I saw any sort of expression from him.

Our guide told us the wild man was a member of one of several barbarian tribes that lived in the Broken Highlands. Though we encountered him just this afternoon, my guide surmised that he had been watching us for at least two days, mostly to gauge our intent and determine whether we were a threat to his tribe.

The idea that there would be semi-nomadic tribesmen living in the Broken Highlands was a surprise; in my travels to the region, I was often struck by how seemingly lifeless it was. While I can catch the sound of crows calling out in the plains of Chrondoria or hear the bellow of a wild boar on the outskirts of Vervanna, the Broken Highlands seem to be wrapped in a blanket of silence. Here, the only noise to be heard is the occasional wind whistling across the barren landscape.

And boy is it barren. A quick look reveals sparse greenery; the shrubs and grasses that can even eke out a living in this harsh clime grow anemically compared to the varieties I’m familiar with in the warmer, more hospitable climates further to the south.

Given how grim conditions are, I often ponder over the conscious decision these barbarians have made in choosing to settle in this benighted land, especially when there are more bountiful lands in which to live. Life in the Broken Highlands is a constant battle for survival; I can’t imagine there being much in the way of animals to hunt or edible greens in which to forage. Perhaps their traditions keep them rooted to the land, or maybe it’s some primordial force that compels them to stay and continue their meager existence. Perhaps it’s pride? Fear of other people?

Alas, their motives are an enigma, one I feel I will never fully comprehend unless I get a chance to speak to them — a prospect which, judging by this latest encounter, is nearly impossible."