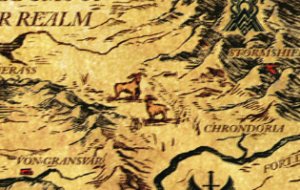 "It took about 3 days of asking around for me to locate Bhaskara's tribe, but when I got word of where he made camp, I headed there as quickly as I could, only to find that he and his tribesmen had moved on once more. Thankfully, his oldest son found me wandering the plains of Chrondoria and led me to him.

Compared to most other Chrondorians, Bhaskara himself was much shorter and very unassuming. But don't let his size or his quiet manners lull you into a sense of complacency. My dealings with Bhaskara has revealed him to be quite the shrewd negotiator and his quick thinking has made his tribe one of the most prosperous ones in Chrondoria. Dare to match wits with him and the best outcome you can hope for is a fair deal. More often than not, however, he generally has the upper hand in the negotiations and can strike a pretty hard bargain.

This time, however, I didn't come to him for his yak pelts or his high-quality cattle. Rather, I came to talk to him about the orcish mobilization that I've witnessed. Though he greeted me warmly, his brow furrowed when he heard my news that some tribes have experienced orc raiders who've successfully made off with valuable livestock. Given that summer had come to an end, signaling the time of year when livestock would head to market, there wasn't much that he could personally do about it. That said, he promised that he'd raise the issue during the Winter folkmoot, where all the tribes gather around to discuss matters of importance to all Chrondorians, and work together to get through the bitingly cold Chrondorian winters.

After partaking of the lamb stew and wine that he offered, I fell asleep in Bhaskara's yurt, but not before noticing that faraway look in his eyes as he gazed out at the night sky, his expression troubled.

I was roused the next morning by an oxen's bellow. After bidding farewell to Bhaskara, I turned my horse and made my way towards Cordo. And Bhaskara? He and his tribe are probably seeking out that last patch of summer grass with which to graze their livestock before they, too, will head to market to exchange their livestock for coin or other necessities."