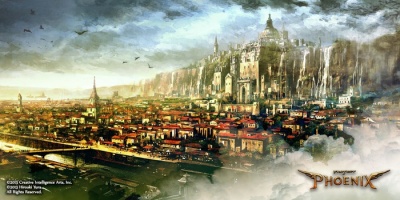 "I’m not sure whether or not it’s a coincidence that the people of Izaria are ruled by the House of Stern, but if it is, you’d be hard-pressed to come up with a more fitting family name that represents Izaria’s national character. In all my years of travel, I’ve yet to come across a nation that’s more surly, more gloomy in its outlook than Izaria. It’s as if the very idea of fun and joy spread to every corner of Azuregard and simply overlooked Izaria.

The city of Cordo, though outwardly resplendent as it reflects the setting sun, possesses very little happiness or sprightly energy. As I walk from the trading house to my room at the Fallen Pegasus (even the names of their inns are grim! Good grief!) and look at the passerbys running the last of their errands or closing up shop, I see so many grim faces that my normally sunny mood grows dark, as though infected by this general melancholia. Even the taverns are draped by this bleakness; people here seem to drink more to forget than to socialize and the bards here sing more often than not about tragedy and woe than anything uplifting. It’s an altogether despondent affair that can become unbearable for outsiders more used to the gaieties of the other Far Realms’ cities.

As unflattering as this image may be, I give full credit to the people of Izaria for their resilience as they endure tragedy upon tragedy. The mood grows especially dark around springtime, where, every morning, I’m roused by a trumpet fanfare announcing the departure of yet another regiment towards the borderlands to seal them against orcish incursions. Many will perish in defense of their homeland, their bodies buried far from Cordo, and they will remain naught but a memory. The loved ones they leave behind seem almost resigned to this state of affairs save for the mutterings in private cursing the orcs in a tone so bitter that your ears would seemingly wilt. This is the way their world works and is a vicious, heartbreaking cycle they go through year after year.

When I enter Cordo and deal with their wild-eyed, gruff, almost paranoid guards, I close my eyes and remind myself of what Izarians experience. As much as the atmosphere may be stifling, my heart goes out to them in the hopes that some day, some day, the conflict will come to an end, and that a new dawn may shine upon Izaria so that the nation will truly grow and prosper as it heals from its deeply scarred wounds."