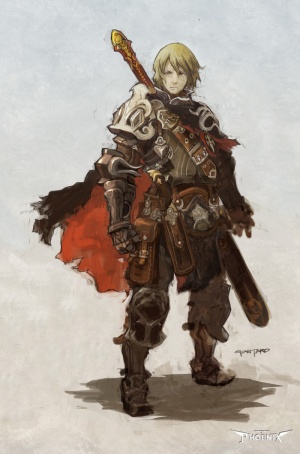 Born to King Magnus Stern and the Second Prince of the Kingdom of Izaria, Marcus’ early life was marred by a great tragedy that has shaped his short-tempered personality and his outlook towards those of other races, especially orcs. The tragedy was what drove Marcus to eventually join the feared unit known as the Death Templars. Through their training and Marcus’ single-minded dedication to become stronger, Marcus has become a weapons master and adept in swordplay, especially with the longsword and shortsword. Unfortunately, his decision to join the Death Templars has driven a wedge between him and his family and even now, their relationship is respectful, but distant.[1]

Much of the respect can be attributed to their shared history which binds them all. Since Marcus was young, his mother had been a figure that he could look upon as a pillar of support. His father, King Magnus Stern, though not unkind, was often times busy with affairs of state, and so, he and Marcus have maintained a respectful relationship, but the two aren't especially close.

If there’s anyone with whom Marcus shared a strong connection early on in life, it would be Belzar, Marcus’s fraternal twin brother. Although Marcus and Belzar have not seen each other in quite some time, the enduring bond these twins share still hold. This means the thought of family is never too far off from Marcus’s mind as he travels around Azuregard, even if he would never say so out loud. [2]

Marcus also have an older sister, Aurelia, who looks after and protects both of them. Marcus sees her as someone who’s dependable, even if he feels a bit uneasy and intimidated while around her. [3]